How Life Began on Earth 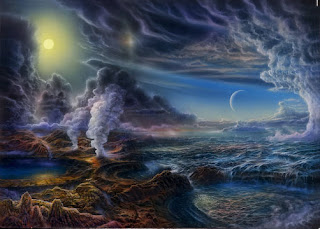 The first single celled organism is also known as the LUCA or the Last Universal  Common Ancestor. It  resembled a modern day cell with its own nucleic acid, lipids, and genes capable of reproduction. It also had the complete blueprints for DNA replication, RNA transcription and protein synthesis.

There is widespread scientific consensus on how  the LUCA  developed into the multicellular complex life forms we see on earth today. But for a long time, it was not known how or what caused the amino acid blocks in the primordial soup to combine to form the LUCA.

A common theory to explain this phenomenon is the ‘RNA world’ theory. Ribonucleic acid (RNA) is a polymeric molecule implicated in coding, decoding, regulation, and expression of genes. Together with DNA and proteins, it is one of the main macromolecules  essential for all forms of life.

The RNA world theory suggests that RNA lifted itself from the primordial soup of chemicals to form short peptides which then formed the fist cell. But recent research by two long-time University of North Carolina scientists — Richard Wolfenden, PhD, and Charles Carter, PhD  suggests that RNA did not work alone – that RNA and amino acids developed simultaneously.

“Our work shows that the close linkage between the physical properties of amino acids, the genetic code, and protein folding was likely essential from the beginning, long before large, sophisticated molecules arrived on the scene,” Carter said in a statement. “This close interaction was likely the key factor in the evolution from building blocks to organisms.”

Protein folding  is brought about by the tRNA – a type of RNA known as the transcriptor RNA. One end of the tRNA selected the amino acids by size while the other end selected the  amino acids by polarity. This helped to transfer the genetic code  accurately to the messenger RNA which could then make the correct amino acid.

“Dr. Wolfenden established physical properties of the 20 amino acids, and we have found a link between those properties and the genetic code,” Carter said. “That link suggests to us that there was a second, earlier code that made possible the peptide-RNA interactions necessary to launch a selection process that we can envision creating the first life on Earth.”

“The collaboration between RNA and peptides was likely necessary for the spontaneous emergence of complexity,” Carter added. “In our view, it was a peptide-RNA world, not an RNA-only world.”

The National Institutes of Health funded this work. Dr. Wolfenden holds a joint appointment in the department of chemistry in the College of Arts and Sciences at UNC-Chapel Hill.